Our School App Stay connected on the go...

As a way of expanding our student vocabulary, SST is promoting a weekly 'Word of the Week'. This week it is 'sanguine'! Students will be rewarded with an Achievement Point for using the WoW correctly. #SSTWordofWeek https://t.co/tQHOS2zjsG

This week in our Weekly Vlog, Mr Anderson speaks about the huge success of our School Production earlier this week. You will also see a few sneak peek performances from their rehearsal! Check it out here: https://t.co/ElctOw7Etj https://t.co/U4ag8bWtTL

Did you know that today is #WindrushDay2022? Our Year 7 students have been set two challenges by Mrs Vincent to help promote this important occasion! https://t.co/bNci5wQrvM

Earlier this week we welcomed @theglobeplayers who performed a fantastic production of 'What you Will' to our students. It was a great engaging introduction to #Shakespeare and it transported our students to the world of Elizabethan Theatre! https://t.co/HQWLa4MQpj

As a way of expanding our student vocabulary, SST is promoting a weekly 'Word of the Week'. This week it is 'laudable'! Students will be rewarded with an Achievement Point for using the WoW correctly. #SSTWordofWeek https://t.co/GLQFLblBBy

We are excited to confirm that there are a few limited tickets still available to purchase for our school production this afternoon! Booking details can be found here: https://t.co/ro78Wv7I9i https://t.co/1hXHHripY1

After months of rehearsing, we are so excited to see our students perform in our first ever school production, 'Will Power', this afternoon! Good luck to our students taking part and special thanks goes to Mr Anderson and Mr Lee for all of their hard work! #breakaleg #goodluck https://t.co/xub2gMsHS2

We are so happy to hear that SST's first ever school trip was a big success on Friday. Our Choir students went to Thorpe Park and had a great time! #SchoolTrip https://t.co/L3QIUiH1y3

Our students enjoyed the weather yesterday afternoon as Miss Orme moved 'Make it Club' to the Courtyard to make the most of this glorious sunshine ☀️#ExtraCurricular #Sunshine https://t.co/iDjdRmLuR2

This morning we are off to @palace_wood Primary School for a Transition Meeting. Tilly, Oliver and Will are looking forward to speaking to the students joining us next year! #SSTTransition https://t.co/B9o3LbPgJw

As a way of expanding our student vocabulary, SST is promoting a weekly 'Word of the Week'. This week it is 'Iniquitous'! Students will be rewarded with an Achievement Point for using the WoW correctly. #SSTWordofWeek https://t.co/omofup2Udb

As part of our transition, there will be a series of weekly challenges for our newest recruits to take part in which are uploaded every week! This week we are challenging students to a Drama challenge. Head over to our website for further info! https://t.co/Z6eqOKai3b https://t.co/LCcdJORzPg

We are delighted to announce Briony, Year 8, has been commended in the Spanish category for the South East region. Well done Briony! #AntheaBellPrize https://t.co/C3XeIF5oYK

As a way of expanding our student vocabulary, SST is promoting a weekly 'Word of the Week'. This week it is 'perpetrator'! Students will be rewarded with an Achievement Point for using the WoW correctly. #SSTWordofWeek https://t.co/pFbBEcLEcF

With June being GRT History Month, our students learnt about what makes a home for the Gypsy, Roma and Traveller Community in assembly this morning! #GRTHM22 https://t.co/DsrMUdJkRm

This morning Mr Payne, Yasmina and Emilis are off to Leeds & Broomfield CE Primary to meet with the Year 6 students starting with us in September! We are excited to start our Primary visits this term #Transition #SSTFamily https://t.co/YuZw1R0d9a

We are so happy to welcome our students back for Term 6 after a restful break! We are looking forward to another packed full term! #Welcomeback #Term6 https://t.co/OWSZS7oOhl

Our students continued their project in collaboration with @SSTSingapore today. They have been discussing how our different cultures are affected by issues raised by the United Nations in their Sustainable Development Goals and how we can work towards a more sustainable future! https://t.co/t2tIkJGMfh

This week we are celebrating @Unifrog Citizenship Week by challenging our students to plan a local project taking action on one of the @UN sustainable goals! https://t.co/xw3mgbMl6r

Recently we challenged our newest recruits to an Art Challenge, as part of #SSTtransition. They were asked to photograph objects or settings which have human characteristics. We were so impressed with the entries! Check out these brilliant submissions from Oscar, Eliana & Ava! https://t.co/rc5Xa3vuTC

As a way of expanding our student vocabulary, SST is promoting a weekly 'Word of the Week'. This week it is 'bystander'! Students will be rewarded with an Achievement Point for using the WoW correctly. #SSTWordofWeek https://t.co/DasJ6cuLKE

We are so proud of our Girls Football Team who made it through to the final yesterday! After a brilliant performance we sadly lost in a penalty shootout however their achievement goes down in our SST history as the first team to make it to a final! Well done girls! #GoTeamSST https://t.co/UVZRGvSO9k

Good luck to our Year 7 and 8 Girls Football Team playing in the championship final this afternoon at the Gallagher Stadium! #GoTeamSST https://t.co/mdQdUACkGX

Session 5 is all about reflection and evaluation. Our students have been busy updating their competencies on their iPads using @Unifrog! #SSTEmpowerDay #Reflection https://t.co/f9bNDFHMJP

During session 4 of our #SSTEmpowerDay we welcome Matt from “We are with you” agency. He is speaking to our students about peer related issues including risks of drugs, energy drinks and the consequences of taking drugs! https://t.co/0NjCeWaVoH

Session 3 is all about prejudice related incidents. Here they are working hard to create a poster to explain what they have learned! #SSTEmpowerDay https://t.co/D3ixBkokWK

Session 2 is focused on students working together. They have learnt that everybody is different in lots of different ways and we need to treat everybody the same. #SSTEmpowerDay #WorkingTogether https://t.co/u5kFWKuKRo

Session 1 of our #SSTEmpowerDay is focused on exploring stereotypes! Our students are understanding the importance of not judging a book by its cover! #sterotypes https://t.co/qaoZVVaICR

The sun is shining for our Empower Day! Today will be a series of sessions focused on reacting to situations in life and considering how our reactions and actions can affect others! #SSTEmpowerDay https://t.co/cfbsF83zf6

Today is the day of our Students v Staff Football match! If wish to make a voluntary donation, this can be made here: https://t.co/xRLAUCbluM https://t.co/hnP6aX0crR

Today we virtually hosted a school in Belgium, where three teachers taught a STEM lesson to our Year 7 students. This is part of a long standing relationship between @VIATSchools and @CanterburyCCUni #collaboration https://t.co/Vu7z4eubVd

We are pleased to open our school for current Year 5 students and parents to take part in a student led tour on the following dates! Head over to our website to secure a ticket: https://t.co/VYfMaksVIa #OpenMorning https://t.co/tXDVUHK6hW

As a way of expanding our student vocabulary, SST is promoting a weekly 'Word of the Week'. This week it is 'collaborator'! Students will be rewarded with an Achievement Point for using the WoW correctly. #SSTWordofWeek https://t.co/3wYtcuUodw

Today we had the 1st session of our 'Learning Alliance Beyond Borders' project that 15 SST students will be working on with students from @SSTSingapore. They will be learning about each other’s cultures, and working together to look at innovative ways to tackle climate change! https://t.co/h2Uyujn8ZU

Check out this car that the students in GreenPower Car Club have made! They enjoyed doing some practice runs yesterday without the body work of the car in place so that they can check everything is working properly before it is raced! #ExtraCurricular #Greenpower https://t.co/oPXmXTVCm2

Congratulations to our Girls Football team who only went and got through to the Championship FINAL! They will be playing at Gallagher Stadium on Thursday, 19 May. Further information on how you can watch will be available soon! #GoTeamSST https://t.co/kzW0O6yIgL

We are thrilled to announce our long-awaited Staff vs Students football match, which will be taking place after school on Wednesday, 18 May, to raise money for our Library. If wish to make a voluntary donation, this can be made here: https://t.co/xRLAUBTcgE https://t.co/NRwMOlKEtr

As a way of expanding our student vocabulary, SST is promoting a weekly 'Word of the Week'. This week it is 'resistance'! Students will be rewarded with an Achievement Point for using the WoW correctly. #SSTWordofWeek https://t.co/sSHHaJbNXQ

Check out how much fun we had raising money for Ukraine by cycling from Kent to Kyiv last week in our weekly vlog! Who else is super impressed with Mr Lee's slow motion cycling?! https://t.co/uNwz14fz7z https://t.co/qMAGGMgJ7g 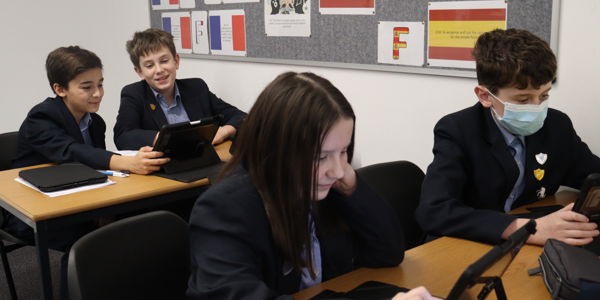 The Languages and Linguistics includes the following:

As a vital member of the curriculum at SST Maidstone, the Languages and Linguistics department leads an inquisitive curriculum which challenges students to understand the mechanics of languages, applying concepts to both French and Spanish. Students are supported to develop their vocabulary in the subjects as well as learn more about the culture of other countries across the world.

The Languages and Linguistics department runs a Quizlet club each week for French and Spanish, as well as a German Club and has entered its first team in the 'Routes into Languages' Spelling Bee! The department run various whole school linked events through the year such as European Day of Languages and Hispanic Day.

The department has strong collaborative links with other departments, such as: 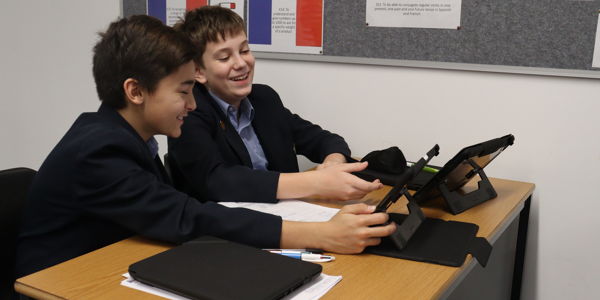 Here at SST we are committed to inspiring, empowering and equipping our students for a life of language learning.

By equipping our students not only with a knowledge of grammar and vocabulary in French and Spanish, but with an understanding of the science of languages, from morphology to syntax, and diacritical markers to gender and number categories, we will empower them to tackle any language that they should need for living and working in and beyond modern Britain. This grounding in linguistics will also improve their competencies in English and encourage them to cast a critical eye over their own communication skills in spoken and written language, complementing and extending their studies across the curriculum.

In addition, exposure to the weird and wonderful nature of the world’s diverse languages family will inspire our students to look beyond the limits of their own language and explore what else is possible, questioning their assumptions and the world-view shaped by the language we speak. Did you know Dyirbal recognises five gender categories, for example? Finally, through engagement in international cultural events such as the European Day of Languages our students will be inspired to pursue the international outlook and appreciation without which they cannot hope to become global citizens.

Students will continue French and/or Spanish into GCSE. Students who opt for the Languages and Linguistic Foundations course will re-opt for another subject.

Language options will be available in the Sixth Form at SST, or other schools within the Maidstone Campus. 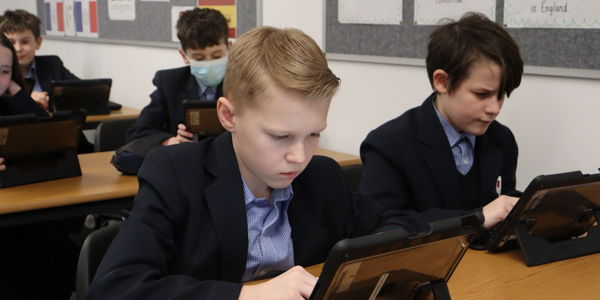 Students are provided with additional support where they have not previously studied a language.

There is an opportunity for students to join the Vocab Taskforce, a group which develops strategies and tips for learning languages.

Throughout Key Stage 3, students are encouraged to think about the next stage of their transition, with a Foundation Year in Year 9 allowing students to explore the learning of languages in more depth. During Key Stage 3 and the Year 9 Foundation Year, students are educated on the benefits of speaking another language in a range of careers which they may not have considered.

During the GCSE course, students are given an awareness of application of the language in different contexts and how learning a language for A Level and at University extends from the GCSE syllabus.

Links with Sixth Form students at other schools on the campus allows discussion with GCSE students so they can find out more about aspiration.

Students are given opportunities to look at different routes to learn languages beyond the Sixth form, including the role of additional languages in jobs involving apprenticeships, college courses and University modules.